My food diary prior to Trick: I didn't eat fruit, I ate lots of lollies, I was meat pies and croissants all the way, every day.

I originally hit Trick Fitness for pole dancing classes, I just loved the physical challenge and all of the upper body strength and fitness, it was so much fun even if I did fail in the rhythm department. In 2011 I was chosen to represent Team Australia at the Roller Derby World Cup, and while I had been happily playing roller derby for a few years I realised that I needed to focus all of my energy and resources on being the best I could be at the Cup!

Previously, I had always wanted to join a gym but was too intimidated. Trick Fitness being both a gym and pole studio made the jump a little less scary, but I still wasn’t sure what I was in for.

The first step was an initial assessment to find out my goals, get baseline measurements and overall health. Due to being active with pole dancing and roller derby I had good general fitness, but that only went so far and my goal was to become a better roller derby player. I remember clearly the slow shake of Andrew’s head as he read my food diary. At that moment it hit home and I realised that I wasn’t anywhere near reaching my potential. The suggested program was one that focused on increasing strength, speed and explosive power. While I was a little scared, I signed the contract and said BRING IT ON!

My first program was a 2 day rotation as I was only able to make it to the gym once or twice a week. The 10 session pass offered at Trick Fitness suited my needs. It wasn’t long until I felt stronger and fitter and roller derby became a lot easier. I was able to ask my body to do things that it wasn’t capable before. All my hard work was realised during the Roller Derby World Cup 2011 when I was voted MVP for Team Australia, something I never dreamed could happen.

After coming back from the Cup adventure, I changed my workout times from afternoons to mornings so I could fit more sessions in. It was hard at first but after a few weeks it became routine and now I get sad if I have to miss a session. I went to 3 - 4 sessions a week and changed to a 24 week membership with a progress assessment every 12 weeks. I love assessments as you get to see the changes, sometimes good and sometimes not so good, but they are always motivating to do better. Assessments also go hand in hand with a change in fitness program and new challenges. Every program is different and builds upon the last program in raising the bar and pushing me to my limits. It’s hard but when you hear the words “a new PB [personal best]” it’s the most awesome feeling of accomplishment as you beat your old self on that rower or a timed circuit.

In the last 6 months, my personal goals have altered to include working on my mental state. You might find that a little strange, but in roller derby, like many sports, being able to make quick smart decisions while exhausted is essential. My last couple of programs have included this theme and I’ve found that I can push myself to go that little bit longer, a little bit faster or one more rep which has better prepared me for playing my sport.

Some might say I’m a freak as I’m now hitting the gym 5 times a week, but I like to think of myself as being dedicated to getting results in the gym and at roller derby. I don’t want to settle for being just ok or average, I want to work towards something more. With the 2014 Roller Derby World Cup tournament in Texas just around the corner, it’s made me even more determined to be in the best physical and mental shape possible and I know Andrew and the team of awesome trainers at Trick Fitness will help me to achieve my goals! 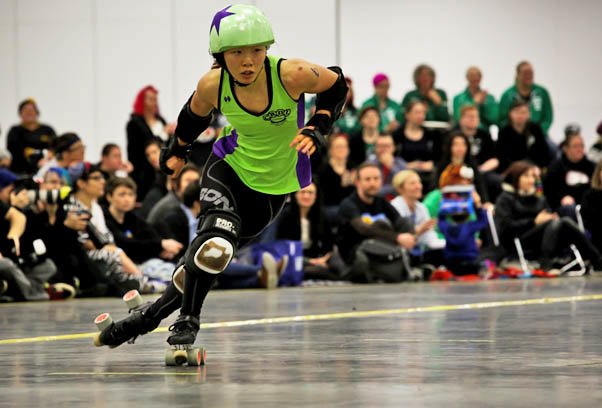 I skate roller derby and I love it – it’s a game, played on quad skates and it’s full contact.

In 2011 I attend the Roller Derby World Cup in Toronto, Canada. Prior to the World Cup I trained roller derby about 4 times a week, we worked on skating skills, a little bit of fitness, teamwork and that kind of thing - my cross training was almost non-existent. On the way back from Toronto I decided that if I was going to try and continue to compete at that level in my chosen sport, I needed to raise MY bar.

I started seeing a personal trainer, she changed my life, and I still see her once a week 3 years on. At the end of 2012, after a solid year of PT, I was lucky enough to be awarded the honour of "Skater of the Season" by my derby league peers at Canberra Roller Derby League. Part of the awesome prize pack was a 3 month membership at Trick Fitness - a gym which has been a league sponsor for several years and my buddy Shorty went there so I figured I’d give them a crack.

While on the track I have always been able to dig deep and push my body hard, I grew up playing hockey and gymnastics so I have always know what it’s like to work for success in sport HOWEVER, I was WELL over 30 now!

So, my first visit to the gym was for an assessment, the team at Trick assessed me, listened to me, analysed by diet, measured me...weighed me (EEP!!)…and then, I went home. When I returned Andrew had come up with a program that for three months challenged me BUT it also made me feel good and successful - MAKING GAINS! My focus was cardio fitness and improving strength. Core strength is SO IMPORTANT for roller skating and roller derby and I must admit I used to find it a bit too easy, Trick found ways to challenge me and ensure my core improved. Cardio…well to be honest, I would rather stick a fork in my own eye than run, but the way it was inserted into my program and also the way in which I slowly built up to be “ok” at it didn’t make me want to vomit or inappropriately use forks.

Trick, yes, they’ll call you if you aren’t booked in or haven’t shown up, I need that – motivation isn’t a problem but I like to know I’m on a team and that someone is on my side. I saw improvements in my skating, I could play at a higher intensity for longer, I made less mistakes as my body didn’t fatigue as quickly so I wouldn’t be looking for risky shortcuts.

I started at Trick with 2 sessions a week as this is what worked for my schedule, I don’t believe in immediate massive lifestyle change – generally these aren’t sustainable. What worked for me was 2 early mornings a week, I would go and work hard and feel so damn virtuous for the rest of the day. Over the last 18 months I've built up to 3-4 sessions a week, I made this decision because I saw improvement in my skating and more generally, I felt bloody good, I was already doing 2 days so at that point the thought of an extra day or two now sounded reasonable. If I had been told 3 years ago that I would hit the gym this much, I would have laughed SO hard my weak core muscles may have given way.

Trick has upped the anti, pushed me without breaking me - although my thighs are killing as a write this from a squat based session yesterday. Your body, your health is SO important, I'm stoked to go to a gym where they helped me work up to things, worked things out at my pace to assist me with wider my goals - get fitter, be better​ AND on top of it all I’ve made friends. Not everyone wants to see you at 5.45 in the morning, but Trick trainers do, and the other folk there are encouraging and fun to be around.

Being part of a derby league that is now number 3 in Australia and making the National squad in 2014 (with final selection just around the corner) is a clear message that my mind and body are on the track I want them to be, this is thanks to hard work, good training, my partner, and most definitely TRICK FITNESS.